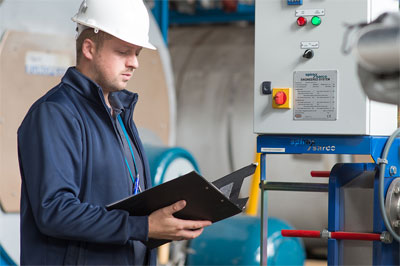 David Lewis is an Estates Assistant Manager at The Royal Shrewsbury Hospital, which is a Band 6 role within the Trust. The job involves managing the teams of Mechanical Technicians, Maintenance Assistants, and Estates Stores.

He joined the Shrewsbury and Telford Hospital Trust Estates Team as a Mechanical Maintenance Assistant at Band 2. Soon after his appointment to the Trust his Career path started.

“I was offered an opportunity by my Manager to go through an apprenticeship, the Trust were willing to develop my skills and pay for me to go to college so I could eventually become a Mechanical Tradesman. I gratefully took the opportunity and committed myself fully to the Advanced Apprenticeship course which took three years to complete, picking up student of the year and gaining distinctions along the way. My Managers supported me through college as well as the senior craftsperson’s I worked alongside. I did find returning to the class room difficult at first, it had been quite a while since I was involved in education. I also earned less money than my colleagues whilst studying at college, due to my status as an Apprentice but I knew if I applied myself and achieved the qualifications I would eventually reap the rewards in the future.

“After successful completion of my apprenticeship I then went on to complete Higher Education which was a HNC/HND in Electrical Mechanical Engineering. Because of the Trusts support, I can have a greater choice in my career path and hopefully continue to progress with the Trust.

“I then became a Band 5 Technician based in The Endoscopy Department at The Princess Royal Hospital as part of the Decontamination Team, I also covered the  Royal Shrewsbury Hospital and an off-site building dedicated to sterile services based in Telford, Queensway. I had to ensure that the Automatic Endoscope Re-processor Machines are functioning correctly, this includes taking water samples for microbiological tests, checking for bacteria levels, proteins, incoming water quality and organic carbon. I serviced the machines every three months, signing them off as fit for purpose or repairing/replacing pumps and other components that are not fit for purpose. The sophisticated machines presented different challenges to those I have worked with in my previous role in the  Trust. My Band 5 position also included maintaining the plant machinery that distributes gasses such as Oxygen, Entonox, Nitrous Oxide, Medical Air, Surgical Air and vacuum around the hospital site. This may require me to either repair or replace Medical Gas System components like Terminal Units.

"In 2017 a secondment opportunity became available within the Trust which allowed me to experience a temporary position with the Royal Shrewsbury Hospital as a Manager. Three months into my secondment I secured a permanent position which has been the best decision I have made. It’s an extremely demanding role but with equal reward. I can continue to aide staff and Patients and work towards improving the working environment.

"For someone who wouldn't usually consider a career in the NHS, such as Electricians, Plumbers, Fitters, Carpenters, Semi-Skilled assistants etc I would recommend looking at the options here as the jobs are diverse, no two days are the same. There are multiple training opportunities which further broaden career choice and development. With the new pay scale agreement earing money in the NHS is competitive with outside salaries, and the time taken getting from the bottom to the top of the band is now reduced."

Find out more about job roles in our Estates Department here.